We all know that Eminem has had one hell of a career. He’s used a lot of his success to give back to the rap community as well through his Shady Records label. One of the people who benefited from Eminem’s help was Joe Budden and he’s letting the world know just how grateful he is that Eminem helped him steer his career in the right direction.

Budden recently released a new track called “Slaughtermouse” which he’s referring to as his “300 bar Stan” and the song is a 4 minute thank you letter to Eminem. You can check out the track below along with a video where Joe Budden explains where he was coming from when he wrote it. Eminem is making headlines again thanks to his 6 minute freestyle on Sway in the Morning. He name dropped some hot topics right now and crushed it

“I invented prick, and that’s a true statement, I see the bitch in you, Caitlyn / Keep the pistol tucked like Bruce Jenner’s dick,” rhymes Eminem. The rapper then took a long pause, before offering an apology, sort of: “No disrespect though, not at all, no pun intended, that took a lot of balls.”

“I made monopoly off misogyny. Sodomy, how many chocolatey Jell-o pops can he possibly lace, walking atrocity / No wonder you scoff at me, it’s obvious I’m as off-putting as Bill Cosby is.”

But he made it a point to say he’s just joking.

“I just say shit to say it, it’s very rarely personal. If it was personal, somebody would know. It’s all in fun.” Em told Sway.

Check it out in the video below Eminem has his name attached to the movie “Southpaw” in more ways than one. Originally he was supposed to play the main character but it just didn’t work out and the role was given to Jake Gyllenhall. Then he released the song “Phenomenal” which was accompanied by an awesome, cinematic video.

Now he’s back with another song from the “Southpaw” soundtrack called “Kings Never Die” and he’s brought Gwen Stefani along for the ride.

Check it out below: Eminem has always made some pretty awesome videos but his latest video for “Phenomenal” might be his best one yet. The clip plays out less like a music video and more like a straight up action movie. Eminem takes on all sorts of enemies and John Malkovich even makes an appearance. It kind of makes you wish someone would make a legit movie based on the video.

Check it out below: Redman Says He Ranks Eminem Up There With Jay Z, Biggie And Nas

There’s no doubt that Eminem has had a legendary career but he’s still considered somewhat controversial in the rap game. Not everyone wants to give him the props that he’s due but Redman is more than happy to praise the Rap God.

Vlad TV recently caught up with Redman and asked him how he felt about Eminem being ranked with legends such as Jay Z, Biggie and Nas. Redman says without a doubt that Eminem belongs up there with the greats.

See what he had to say in the video below: 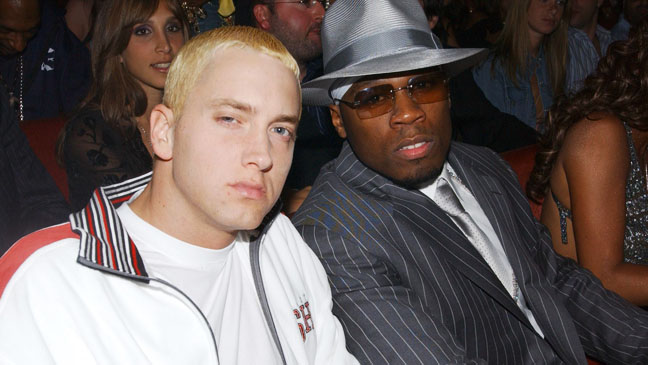 50 Cent recently spoke to MTV where he talked about his upcoming album, “Street King Immortal.” He talked a song he worked on with Eminem called “Champions” where he compared it to an old school Eminem sound. You can see what he had to say below.

“We wrote the song in Detroit, I [went] out there and we recorded in his studio, which is his comfort zone, Em is a lab rat–in case you didn’t notice. You don’t see him unless he’s scheduled to be there. Other than that, he’s probably writing something right now.”

“It’s a really cool process, It’s usually more fun than it feels like work [The song] sounds like one of those hit records you’ve heard from Eminem in the past [with] an R&B singer on the chorus. And it’s one of those songs that he wrote his portion of the song before I got there.” 50 said. Eminem is back again and this time he’s featured on Yelawolf’s latest single “Best Friend.” The track is from the upcoming Yelawolf album “Love Story” which is out now.

Eminem is on top of his game when he drops his verse and you can check it out below. Ten Second Songs is a YouTube performer who’s known for recording covers of songs and performing them in many different styles. His most recent video features him performing “Rap God” by Eminem.

The video was just uploaded on Monday and already has well over 1 million views. Whether you like him or not you’ve got to admit, it’s pretty impressive.

Check it out below. 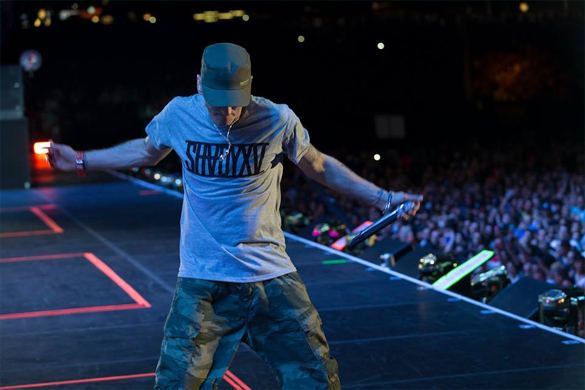 Eminem has always had a reputation for being a fast rapped but he recently took his skills to the next level in the song “Speedom” with Tech N9NE.

We’re not kidding you when we say that you’ve never heard Eminem like this before. Just when you thought he couldn’t get any faster, he goes and does this.

Check out the song below.

“I’ve been wanting to work with Eminem for a long time,” Tech told HotNewHipHop last month. “It’s funny saying this on the mic ’cause I haven’t been able to say this to anybody, [but] Eminem finally came through and blessed me with a 24-bar verse, when I only needed a 16.” 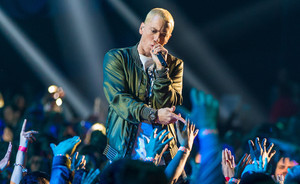 Eminem is the gift that just keeps on giving. He surprised everyone by showing off a preview of a new song for the Jake Gyllenhall movie “Southpaw.” The song doesn’t have a title yet but what you do get to hear in the trailer is phenomenal indeed.

Check out a clip of the song in the trailer for “Southpaw” below, the track comes in about halfway through.