Eminem is now considered an icon in the world of rap music, but there was one a time when he was just trying to make a name for himself.

Along the way Em got to meet his heroes, and he recently sat down to talk to LL Cool J for his Rock The Bells Radio show on SiriusXM which is set to air on September 1.

Eminem shared the story of the first time he met LL Cool J in a Foot Locker, and he noted that LL quoted lyrics from one of his songs.

“And the next thing you know, I’m in Foot Locker with Kirdis Tucker and she’s getting outfits for the ‘Just Don’t Give a Fuck’ video, and I see you,” Em continued to LL. “I’m like, ‘Yo, he’s in here by himself.’ I was buggin’ the fuck out… You quoted a lyric back to me. You said, ‘Yo, how can I be white / I don’t even exist.’ You quoting that lyric back to me, was like, I think I s**t myself.” 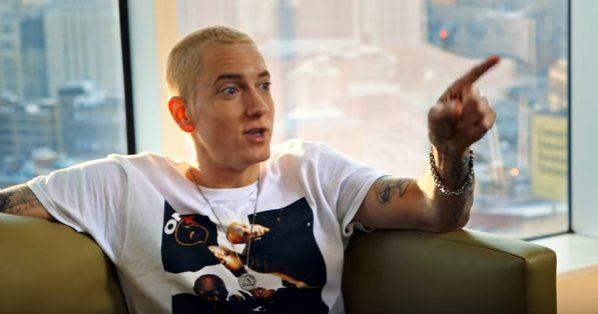 Eminem has played quite a few shows throughout the course of his career, but he just took his first on stage selfie a few days ago.

During a performance of “Rap God” in London the legendary rapper decided to snap a photo, but it looks like Slim Shady might need to work on his selfie taking skills, just a little bit.

This is my first on-stage selfie.  Thank you London! #selfie🐐 Eminem returned with a new album a few months ago, but he still has a lost album that’s been sitting on the shelf for years.

DJ Whoo Kid recently asked 50 Cent if he and Em might collaborate and create a full album together someday, and he said that it’s something that could happen.

He then went on to say that he and Eminem collaborated on Em’s lost album “Relapse 2” but Em decided not to release the album because of the response “Relapse” got.

“When we did Relapse, we did Relapse 1 and 2,” 50 said via HNHH.com. “My favorite music was on 2. We collaborated on a lot of joints on the second one, but when he didn’t like the response he got for Relapse, he went to Recovery.” Unfortunately, there seems to be one major hurdle – Eminem himself. “He’s his toughest critic,” says 50. “But I always look at this shit like, did you hear what they just put out? This shit is garbage! You could put this shit out right now!” 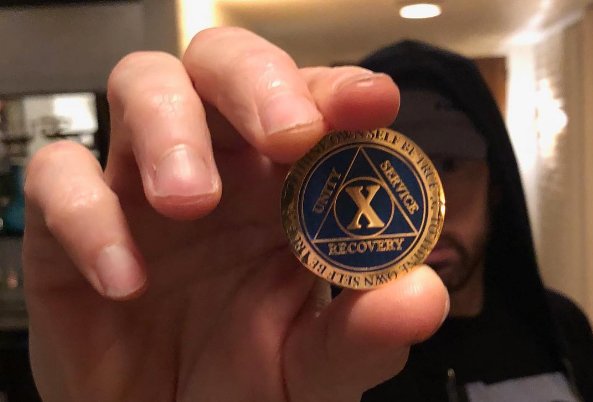 It’s no big secret that Eminem has had his fair share of troubles with addiction, but 10 years ago the iconic rapper decided to put all of that behind him in pursuit of a sober life. Over the weekend Em took to Instagram to celebrate 10 years of sobriety when he shared the following photo:

The post got a positive response from many within the music community, including Royce Da 59 who congratulated Em on a decade of sobriety. Eminem Throws Shade At Himself During Coachella Performance

Eminem released his new album “Revival” a few months ago to mixed reactions, and there are some people out there who think the legendary rapper just doesn’t have it anymore.

Em appeared to reference the criticism during his performance at Coachella, when he asked fans if he could bring them back to a time when he was “actually dope” before performing “My Name Is.”

You can check out the clip for yourself below. Eminem recently made history as the RIAA has revealed that he’s become the second highest selling singles artist with 107.5 million units sold. Em is now second only to Rihanna with 121 million sales. Selling records is something that Eminem knows how to do, and it just so happens that it’s something his friend 50 Cent knows how to do as well. He recently showed some respect to Em when he posted the following on Instagram: Eminem is no stranger to making history as he’s been selling albums and selling out concerts all over the world for decades now, but he recently crossed a huge milestone. The RIAA has announced that Eminem is now the second highest selling singles artist of all time and he has moved 107.5 million units.

Eminem is second only to Rihanna who is the highest selling singles artist with 121 million units moved. Congratulations to Eminem on this huge accomplishment. Eminem recently released his new album “Revival” and it features quite a few famous guests. One of those famous guests happens to be none other than Ed Sheeran co-wrote and sings on the song “River.”

Fans who are lonely on Valentine’s Day this year can look forward to a new video from Eminem which is sure to be emotional, as he wished everyone an “Unhappy Valentine’s Day” when he shared a clip from the “River” video.

Check it out below. 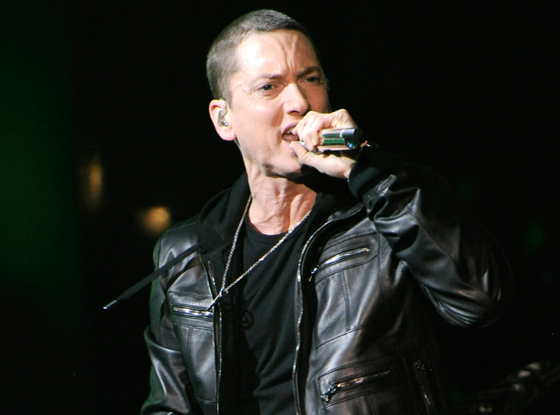 Eminem Sends A Harsh Message To His Critics

Eminem recently released his new album “Revival” and the album has been met with a mixed response from critics.

Em recently dropped a new remix for his song “Chloraseptic” which features 2 Chainz and he fired back at his critics with the following message:

“Not as raw as I was; ‘Walk on Water’ sucks; Bitch, suck my dick/ Y’all saw the track list and had a fit ‘fore you heard it/ So you formed your verdict while you sat with your arms crossed/ Did your little reaction videos and talked over songs/ Nah, dog, y’all saying I lost it, your f**king marbles are gone.”

You can check out the track below. Eminem fans have been waiting a long time for the rapper to release a new album, and it looks like we’ll finally be hearing new music this year.

Hits Daily Double is reporting that Universal Music Group is planning to release three huge albums in November from Taylor Swift, Sam Smith and Eminem. Smith’s album will drop on 11/3 with Taylor’s album following on 11/10 followed by Eminem’s album on 11/17

It’s also being reported the Eminem is set to appear on the new P!nk track “Revenge” which is set to be released on 10/13.